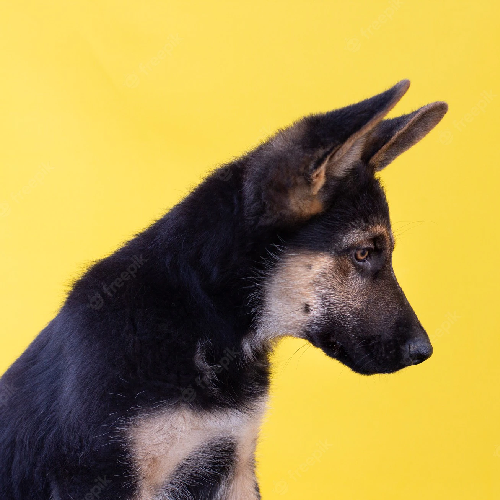 German Shepherds (Alsatian), known for their intelligence, loyalty and courage. Initially bred to herd sheep, today they are widely utilized in various roles such as police dogs, guide dogs for the blind and as loving companions. But with their physical characteristics come grooming and care requirements, and German Shepherds are no exception. German Shepherd Teething and shedding are just a couple of the things to consider when it comes to taking care of your dog. In this article, we’ll delve into the history, temperament and characteristics of the German Shepherd and provide a comprehensive guide on how to properly care for your furry companion during the teething phase and beyond.

The German Shepherd Dog History started in in Germany in the late 19th century. So the breed developed by crossing local herding dogs with imported breeds such as the British Sheepdog and the French Beauceron. The breed initially known as the Alsatian Wolf Dog because of its resemblance to wolves. The breed was first recognized by the German Kennel Club in 1891 and quickly gained popularity due to its intelligence and trainability.

German Shepherds were originally bred to herd sheep, but today they are known for their versatility and are used in a variety of roles such as police dogs, guide dogs for the blind, and as companions. The breed’s popularity increased rapidly during World War I as they were used as messenger dogs, ambulance dogs and for guard duty. After the war, German Shepherds became one of the most popular breeds in the world, and still remains so.

German Shepherds temperament intelligence, loyalty, and courage. They are highly trainable and are often used in a variety of roles, such as in law enforcement, search and rescue, and as therapy dogs. They are protective of their owners and families and make great guard dogs. However, with proper socialization and training, they can also make great family pets. They have a strong work ethic and need regular physical and mental stimulation to be at their best.

Due to their intelligence and trainability, German Shepherds excel in various dog sports such as obedience, agility, tracking, and Schutzhund (protection sport). They also known to be very adaptable and can adjust well to different living environments and situations.

The temperament of German Shepherds can vary depending on breeding, socialization, and training. It’s important to note that early socialization and proper training will help to ensure that a German Shepherd grows up to be a well-behaved and balanced adult dog. They can be quite sensitive and can sense when their owners are upset, so they are known to be very empathetic and loving. However, when they sense a threat, they may act to protect their owners and family.

German Shepherds have a thick, dense coat that requires regular grooming to keep it in good condition. They shed moderately throughout the year, but during shedding season they will shed heavily, requiring more frequent brushing to prevent matting. Brushing their coat regularly will also help to distribute natural oils throughout their coat, keeping it shiny and healthy.

Overall, German Shepherds require a moderate amount of grooming and care to keep them in good condition. They are a relatively low maintenance breed when it comes to grooming, but they have a thick coat that requires regular brushing and shedding season grooming. They also have high energy level and exercise requirements and need regular physical and mental stimulation to keep them happy and healthy.

German Shepherd, like all puppies, go through a phase of teething as they grow and develop. This process can be uncomfortable for the puppy and may cause some behavior problems for the owner. Understanding the German Shepherd teething process and providing appropriate chew toys can help alleviate discomfort and prevent damage to household items.

German Shepherd teething begins around 3 to 4 weeks of age, when their first set of deciduous, or “baby,” teeth begin to emerge. This process continues until around 6 months of age, when all 42 adult teeth have erupted. The process can be uncomfortable for the puppy, as the new teeth push against the gums, causing inflammation and pain. This discomfort can cause the puppy to chew on anything and everything in sight, including shoes, furniture, and household items.

To help alleviate discomfort and prevent damage to household items, it is important to provide appropriate chew toys for your German Shepherd puppy. Hard rubber toys, nylon bones, and antler chews are all good options. These toys are durable and can stand up to the puppy’s need to chew. Additionally, freezing a wet washcloth or providing a frozen water bottle for the puppy to chew on can also provide relief for sore gums.

Understanding these health issues is important for German Shepherd owners, as early diagnosis and treatment can help to prevent or manage these conditions. So German shepherd common health problems below:

Early diagnosis and treatment can help to prevent or manage these conditions, and regular veterinary check-ups and a healthy diet are important for maintaining good health. It’s important to purchase puppies from reputable breeders and to be aware of these common health issues in order to provide the best possible care for your German Shepherd.

When looking to purchase a German Shepherd puppy, it’s important to purchase from a reputable breeder. A reputable breeder will have health clearances for the puppies’ parents, which will give you an indication of the puppy’s health potential. They will also have socialized the puppies from a young age, and will have done basic training with them.